Here are the Showreels to show my development this year:

Here is the final version of Radiation Runners in it’s 3D Version.

Here is the corrected final design:

This is corrected version of the Radiation Runners Bus Stop and I have tried my best to show the narrative of the world that this image originates from. The image shows the narrative clearly and effectively to the target audience. The perspective of the images is quite accurate as well and this helps present all the objects within the narrative and image effectively. The colours used for the image as well help bring out the best of the narrative by high lighting what materials some of the objects are made out of as well as what the power source of the transport is.

This post is to show some of the corrections I have for the original design ideas.

This design idea for the final design was focusing on the people and where they wait more then the actual means of transportation. The idea was just a rough sketch but displays a general ideal of the narrative involved. The perspective is slightly of but not by much but works some what with this narrative.

This next image is another idea for the waiting area, basically the idea focuses on the general seating and then the mode of transport in the fist part of the image but then in the second section it focuses on what was mentioned earlier but also includes vending machines and a decontamination facility that allows the users to be decontaminated from the excess radiation and harmful toxins from before and after the use of the device. The perspective of the rough sketches is decent and allows the drawings to appears realistic even though it is only in 2D. 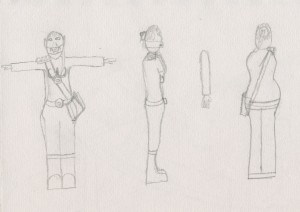 These next drawings are to show what the characters look like that interact with the area and how they affect the narrative. In this case to help reveal what the actual narrative is. Mainly what the world is that the character is located within and why they are using this type of transportation. In this case the world is destroyed by the over use of radiation based resources and now the way to survive to wear radiation absorbing 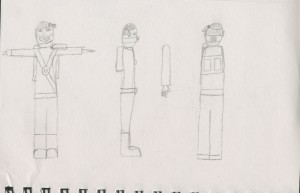 masks. The design of the characters is interesting due to the fact that they have a unique design to them that is appeal to the eye and isn’t over exaggerating the design of both the character and bus stop.

Here is the final Design Piece or Concept Art of the Radiation Runners. 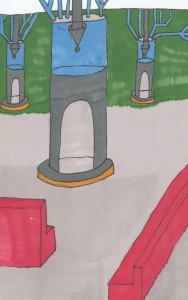 Here is the final design colour scheme development for the Radiation Travel.

This is the original final design which I am using just for a reference while, I develop the colour scheme for this project. The colours i thinking of using is green which is standard for radiation, blues, silver, metallic grey and  yellow. Theses colours are useful for this project due to the fact that they are often either associated with radiation or danger and are also welcoming and warm colours. 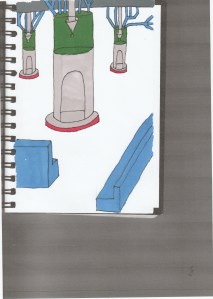 This is my first colour scheme idea, I considered having the glass green due to it been near where the radiation beam is stored so the colour would leek out some what. The grey was used to reassemble all the metal components within the machinery and to highlight how important the machinery actually is. The red is show to mind the step that the machine is connected to. The blue was chosen because it is calming which helps keep the target audience/user calm before they are converted into radiation for the travel. Theses colours together are both appealing and relaxing to the target audience as I have shown the designs to them.

This image is using the same colours as stated at the top of this post except the green is used to create a cloud of escaped radiation that isn’t very useful or harmful to the users and technicians. The red is used for the waiting chairs, the red is mainly used for a warm welcoming. The grey/metal is used to identify what is metalic and what the actual mode of transportation is. The yellow is used as a warning to mind the step and the blue is used as a representation of the glass. This is considered the most appealing by the people I have shown the design to because it uses a wide range of colours and shows what Radiation runners is about.

This is final design development, This is probably one of the worst idea I came up with for this project and didn’t receive much of a appeal for it’s design is fairly boring and that it is plain as well, In fact some people commented that the shaft above the chair looks more like a kitchen vent. That is technically the point of the shaft it is to in hail the radiation vapor or wave length after the ray has hit the user to transfer them to their desired location where the will be recreated so they can move on to where they want to go.