This post is to show some of the corrections I have for the original design ideas.

This design idea for the final design was focusing on the people and where they wait more then the actual means of transportation. The idea was just a rough sketch but displays a general ideal of the narrative involved. The perspective is slightly of but not by much but works some what with this narrative. 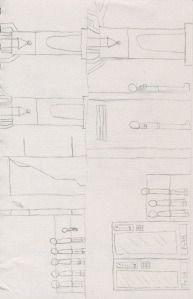 This next image is another idea for the waiting area, basically the idea focuses on the general seating and then the mode of transport in the fist part of the image but then in the second section it focuses on what was mentioned earlier but also includes vending machines and a decontamination facility that allows the users to be decontaminated from the excess radiation and harmful toxins from before and after the use of the device. The perspective of the rough sketches is decent and allows the drawings to appears realistic even though it is only in 2D.

These next drawings are to show what the characters look like that interact with the area and how they affect the narrative. In this case to help reveal what the actual narrative is. Mainly what the world is that the character is located within and why they are using this type of transportation. In this case the world is destroyed by the over use of radiation based resources and now the way to survive to wear radiation absorbing

masks. The design of the characters is interesting due to the fact that they have a unique design to them that is appeal to the eye and isn’t over exaggerating the design of both the character and bus stop.