This Post is for the WOW! Project Design Ideas done in pen:

This image contains prototype sketch ideas for animations that can be used for each women in my women of the World Project. The plane sketch is a symbol that I specifically design for Amy Johnson since she is one of the world’s most famous female pilots. I looked a few images of Amy Johnson’s plane to complete to base this sketch on as shown below:

This Image belongs to Daily Mail.

The next idea for Amy Johnson focused on a key component on her plane the propeller, the idea behind this is that the animation for Amy Johnson would show the propeller start to spin and eventually reach the acquired speed to fly. The Phone sketches were an idea that connects to Maureen Lipman an actress who has a strong connection to BT the phone and internet service provider. My first phone Idea wan’t the best as it was based on the more modern phones that people keep at home and people may not be able to connect with Maureen and the original advert if I use a modern film. The second Phone sketch in the image above focused more on a traditional phone design from the era but only the actual hand piece while this does work it don’t give an accurate idea for Maureen so I will need to go back to the drawing board with the idea. The sketches of the quill and ink and the book were the symbol idea that I had for Winfred Holtby to show that she is a writer but I felt that the quill wasn’t the best idea since it didn’t really connect with the era that I had chosen for this project. The book had the strongest link since she had written several over her life time but I couldn’t think of a way to animate in a way that would connect with Winifred Holtby but my Tutor Gareth suggested that I should think of a way that isn’t so literal but should still connect to the women this animated piece is connected to, the solution that I cam up with was to make the book start to fly of in the distance to represent Holtby’s vast imagination. The sketch of the sewing needle and thread is one of my early concept for  Emily Clapham as is the dress dummy sketch as well since she is most famous for her dress work that was said to compete in the fashion industry.

This next image of sketches focused more Lillian Billoca, who was one of Hull’s most famous women because who helped introduced radio’s to most modern day ships after the trawler incident of the coast. My first sketch was based on a old fishing trawler that was commonly used during in 1968. This design linked very strongly to the Lillian Billoca not just because she introduced radios but also because her family has always been involved with the fishing industry. This is also why I drew a fish and a very basic fishing boat, unfortunately these two designs aren’t very well thought out and don’t really have a strong connection to Lillian Billoca. The skull designs were based and supposed to link to Stevie Smith’s poems which were often associated with dark themes such as death. These are the worst designs that I could come up with for this women, so I went back to the drawing board. My Tutor Janis suggested expanding my list of Famous Women from Hull to be more precise to look into Women from the music industry. Which led me to finding about Women such as Norma Waterson and Tracey Thorn. The guitar was based on Norma Waterson a folk and country music musician.

This image of sketches was focused more on Tracey Thorn and Norma Waterson more than any of the other women even though there are sketches for trawlers and sewing equipment. The Hat was an idea based on Norma since she was a Folk and country musician and I thought that at the time this might offer a strong connect that the target audience might have been able to recognise and see who it was linked to easily and effectively, unfortunately this is not the case, most people do not recognize her via this symbol. The choker was an attempt to link with Tracey thorn unfortunately while she is a gothic based singer not many people recognised her via this symbol so it might not be the best idea to use this symbol for my client project. 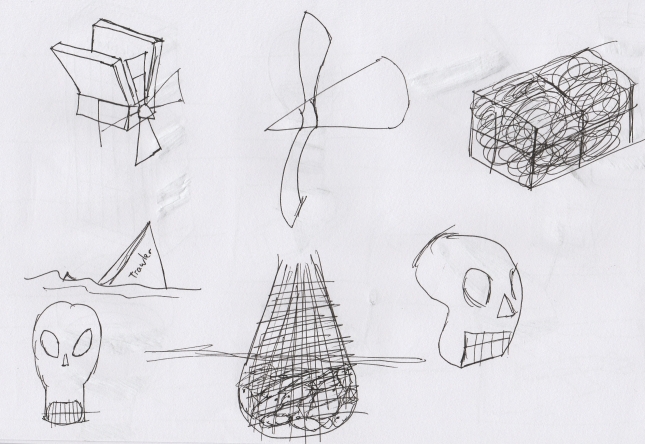 The entire page focuses on Jean Bishop or as she is more commonly known in the news the Bee Lady. My first idea on this page of sketches is based on her actual Bee Lady Costume:

I have taken the standard Money donation cup and essentially put it into it’s own version of the Bee Costume with wings included, I originally thought the idea would be quite cool and many people thought the idea was unique and managed to see that it was connected to Jean Bishop. The next design was based on her personalised Phone box that she is also famous for and many people see a connection to this design but some have said it is a bit too obvious and I need to find another way around this design.