Here are the development ideas for my Ass and His Driver Animation:

The aims of this project are:

The aim for this animation project is to develop a Fictional Animation that successfully shows the chosen Aesop’s Fable, clearly and effectively to the target audience. This is to make sure that the tale and the lesson that is within, is easy to identify and understand. The Animation will also utilize correct, effective and suitable sound effects for this animation, that do not offend the audience and are either my own or are Royalty Free in Nature.

As you can see I have evolved my designs since my last post. I will start with my developed environment designs but after I while I realized I had focused entirely on the city in the distance or close by aspect of the designs, so I decided that I will go back to my design ideas and from there use one of the empty mountain range designs for my environment in this fictional animation. The reason why is that I believe the lonely and bland designs that I came up for the animation previously made the narrative stronger and gave the donkey a reason why he wanted to get the journey over quickly because the environment was unnerving.

I then started to develop the designs of the Ass by adding things to his designs such as reins on his head and cargo and equipment to his back to make it seem more realistic even if the narrative for this animation is fictional some form of realism is still required. My first few designs for the donkey involved this sort of design:

Inspired and Compared to this:

As you can see I have actually taken the idea of a stereotypical Donkey wearing a rug or mat on it’s body as a form of saddle. Even though this is a rather basic idea I think it still helps bring the idea to life and several others agreed with me, this image also gave me the idea to add other things to the donkey designs such as crates, bags and timber. Most of my ideas have actually come out quite well with this concept, such as:

Most of these designs seemed to work the only one that didn’t was the one with tonnes of crates. When I looked at it it seemed that the perspective was wrong and that it didn’t suit the actual image I was trying to create, so I started to use sheets or blankets to cover the products the donkey was carrying and this idea seemed to work a lot better than it’s predecessor. it made the idea of a traveling merchant much more believable therefore the story was much more effective at capturing the target audience’s attention in the process.The only down fall was my donkey’s head was going back and forth it seemed to come out OK in one design but awful in another. Hopefully the final design will not have this problem because I think I have found were the problem is coming from. It is the actual chin of the donkey.

I think most of the development ideas for the merchant/driver were influenced by several animated products without me realizing until my brother pointed it out: 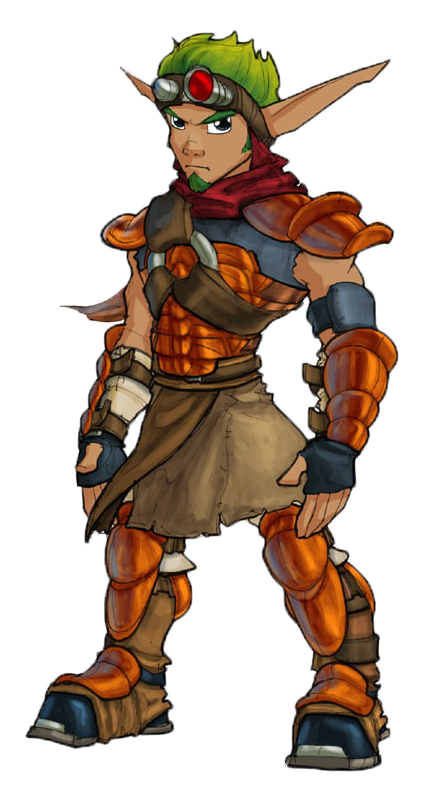 Jak is owned by Naughty Dog and Sony

Natsu is owned by Funimation and his creator Hiro Mashima.

Yes some of my designs are inspired by these characters mainly their clothing because they scream either traveler or explorer. I believe that they could help with the narrative of the story in this way by helping the audience realize that the merchant/driver does a lot of traveling in general. When I looked back, most of my designs utilized a scarf or robe styled in someway after Natsu’s scarf whether it been the white scarf or the pattern. I think they helped highlight the characters traveling purpose. Most of the designs looked rugged which was good because it showed that not only was the character well traveled but he was experienced which made the story a lot more believable to the target audience. The downside was that a majority of the designs looked ridiculous because of the awfully proportioned head, that all my characters had, I will need to look into this further, by practicing this more.