Here is a new version of the storyboard for the Alexander the Great Animation. As I stated in one of my previous posts for this project I have decided that instead of having the story of Alexander told like it is actually happening, I have decided to have a bust of Alexander tell his origins to the audience. The reason for this is that I think one it will be a nicer way to hear his origins story because it makes it seem like it is more personal and let’s face it often a tale is better from the Horses mouth (Pardon the phrase). So Narrative wise it is a good choice because it allows not only the target audiences attention to focus on the bust but it feels more personal coming from Alexander. 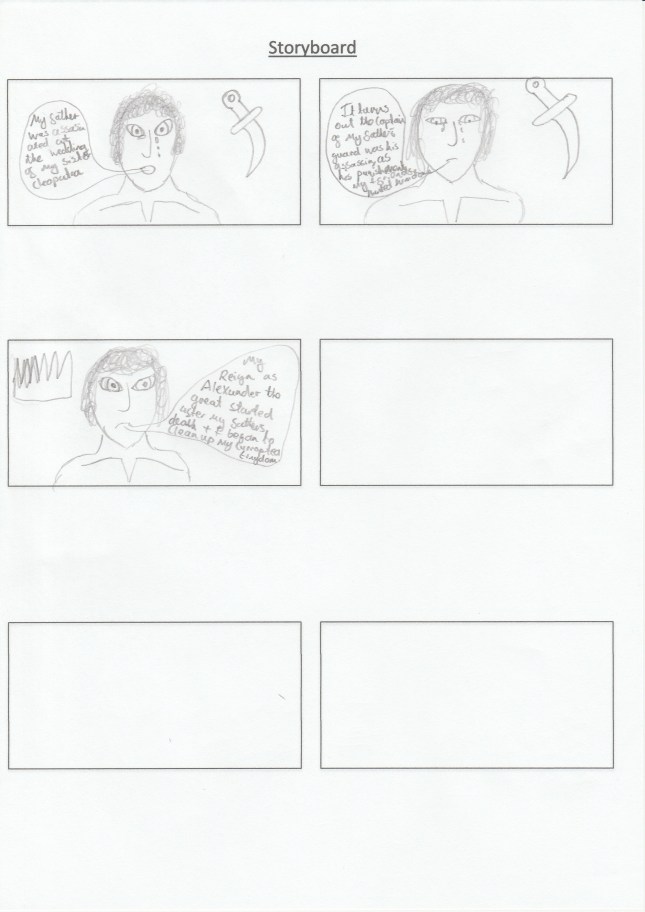 Here are the aims for this project:

This storyboard is a lot more successful then my previous one, the story is easier to understand then it’s predecessor because of the way the narrative is presented to the audience. It is clear, precise and doesn’t go of in a tangent at any point during the animation/storyboard. For example the opening to the animation has Alexander’s name and title as the name of the animation/storyboard showing what or in this case, who is the main character within this animation. While the storyboard may appear not to be much, it still gets the narrative across successfully because all the focus is placed on the bust. While the stories of Alexander’s past are been told there are symbols, some will be animated and some will not. This is to help strengthen the narrative of the story and to make these events more recognizable to the target audience, so that they can understand what is happening in the animation, as well as what happened to Alexander. The only down fall with this storyboard, I believe is that the animation might be just short of the 30 second minimum, so I will need to tweak the actual animation to get this to work.

The sounds for this animation will be researched into later, although I have already considered various sounds that I might utilize within this animation, when I create it. For example the Horse animated clip will have either just a audio clip of a horse neighing or hoofs colliding with the ground with this scene in the animation:

The reason why this will help is that it makes this scene a lot easier to understand since not only is the character talking about the horse but there is a animated image of it.  I think this scene works a lot better than the previous storyboard version and it allows more time to be seen on Alexander who is telling his own tale. The only down fall is that I have to be careful about what sound I use i.e. if I just use hooves the people may not associated this sound with a horse they may either see this as a Donkey instead which isn’t correct.

Other sounds I have already considered for this animation is for the actual talking of the character Alexander. I personally think in order to add to the character and make it appear more realistic and to draw in the target audience, Alexander should appear to talk in a unknown language something like Ancient Greek. This is so that the audience can’t understand him unless they read the speech bubbles coming from the characters mouth, which contains the actual information about him. This is done not only to represent the character’s old culture but also to make him seem more mysterious to the actual audience watching the factual animation. The down side is that I will need to be careful with the speech bubbles since they won’t be able to fit everything in them and the sound can’t be to annoying or people will get fed up with not only with them but may also be offended with them.