Here are my other designs for the Bullying Animation, me and my tutor decided that I should do my animation on the the life of the victim, so I abandoned the symbol based part of the project and instead drew an actual character who has a life of victim from a bully: 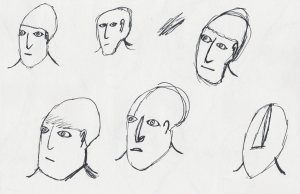 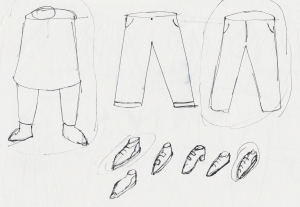 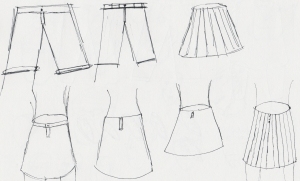 The first two scanned images are that of me working on the characters head development due to the fact that I felt that my head work needed well a little work again because it still seemed to come out overly proportioned and when I finally started to get used to it I came across the final version of the students face which I l use later on in the final design. The last four of the scanned art is that of clothing or school uniforms.

These are the images that my school uniform is based off as well as own old uniform, as you can see most of my designs utilize the shirt because to gives of a school feel straight away. My first focus was the actual trousers or skirts of the student uniform, so I went through several versions of each. On the skirt as you can see I went through several different lengths for them as well as if they should be creased as in they are styled that way and if they had a belt feature. In the end all those different variety’s of the skirts didn’t seem right to the people I showed it to until the plain long skirt. The trousers/shorts also through several different designs including belts, button ups and zippers all of these designs seem more popular then skirts and the most popular was the standard trousers with a belt and zipper. The shirts hardly changed from the standard basic appearance expect for the ties which I came up with several different styles until, I based the last one on the Beverley Grammar school Tie Design, see bellow: