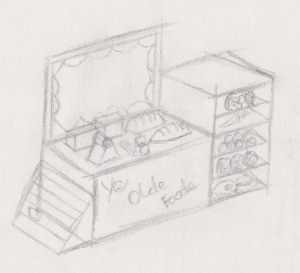 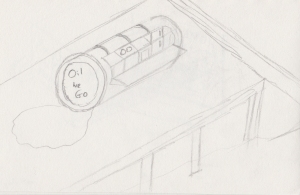 The second Idea is based within some docks and the theme of the vendor is quite obvious, it is to do with with oil. The narrative quite clear in a sens it is to do with either workers who work with oil or fish. The idea is quite appealing to the eye, due to the fact that the design is simplistic but also captures the essence of the docks quite well. Although I think this could use some tweeking in the development to make it look more realistic and maybe focus the theme/Narrative better. 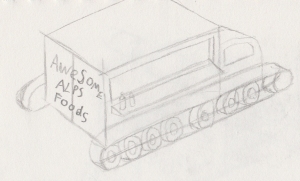 The Next Design Idea is one of my favorite ones, I got the idea from seeing a skiing resort advert and fought about doing a vendor that could navigate them selves around the mountains to the skiers for hot meals. The idea is appealing and attractive so this is going to be one of my developed ideas later on. 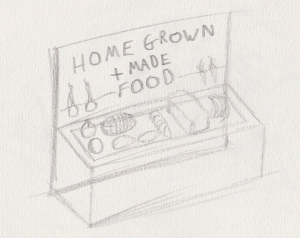 The next Idea is based on a farmers shop I saw in Beverley on Saturday a few weeks ago. The whole stall is designed to give a farmers and home grown produce feel to the vendor. This is done quite well due to the fact that the food offered appears to be fresh and what can only be found on a farmers stall. The idea is some what appealing but has been used quite a bit so it might not be the most suitable idea to use. 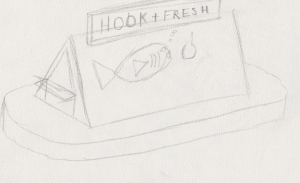 The next idea is based on the The Legend of Zelda Wind Waker Merchant Beedle, who travels the great sea selling all sorts of products to sailing ships. The Hook and Fresh is a ship that sells fresh fish to passing by sailors and other means of transport of the water. The idea is some what appealing and I might use this later one but it might need more altercations to the design, due to it been slightly weak in narrative. 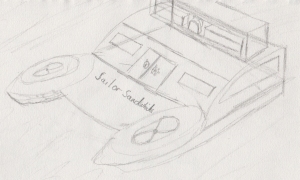 Sailor Sandwiches is based on Marvels S.H.E.I.L.D. Helicarrirer the idea is that the vendor can travel by both air and water to deliver the food to passing by sailors and pilots. This idea has a strong narrative and appeal which is why I will be carrying on this idea into my development , but needs a bit more tweaking.