Here are some of my Design Idea’s for Ploceidae The Weaver, they mainly focus on his hands and feet due to the fact that these are some of the main characteristic of Mobians due to the fact that many of them have no cloths except for a few, another reason why the feet and the hands were focus on is because the feet and the hands define the character and their personality (although many people do not actually realize this e.g. Sonic’s Shoes and gloves are based on running equipment which defines his nature and personality, Cocky and Free Spirited Personality). The image below are some of my ideas that are designed Ploceidae’s Characteristic and Nature that I described in my character choice section of this task in one of my blogs. 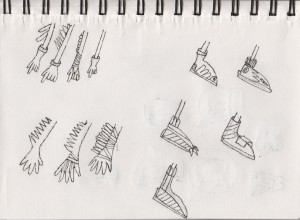 The first row of hand is Ploceidae with Gloves while the second row, is him without gloves and focuses mainly on his bird nature by making his hands appear as they are bird wings and his fingers are parts of his feathers. The first hand in first row was based on a basic pair of white gloves that reached up to the elbow and have a metal ring around the opening of the gloves and he has a few feathers sticking out of above the elbow. The reason this design was draw was because the feathers define the characteristic of the character e.g. a bird and that the gloves also defines that character does something that involves him needing to wear protective gloves to do work e.g. He is an inventor/builder. The second arm design on the first row was designed similar to the first hand on the same row but is shorter and instead of having a ring, there is a watch/communication device and has lot more feathers on the arm but almost completely cover his arm this time. The feathers on his arm yet again define that he is a bird and the gloves suggest that he does something that involves timing which he does i.e. piloting. The Third pair of arms on the top row, The arm has the feathers again but they are a lot smaller then the other arm designs so far and has sport tape/bandages wrapped around the lower part of the arm and around the fingers, the design doesn’t include gloves because I like the idea of the Bangages/Sports tape because he is trained in the art of Sky Fu so the bandages/sports tape not only define part of his character but they also help soften the blows of his attacks keeping him from hurting himself. The fourth glove in the top row is a basic glove, I chose this design because I wanted to go back top the standard mobian based design, although it doesn’t show of any of the personality of characteristic of Ploceidae very well. The first arm on the bottom row, for this arm design I have gone back to the concept of showing how much of bird this character actually is, by forgoing the standard gloves again but this time I have his arms designed as wings by making his look like they are covered in feathers including making his fingers look like feathers. The second arm on the second row is designed similarly to it’s predecessor except their is sports tape/bandages wrapped around the arm of the, to once again show that Ploceidae is a Sky Fu expert, the wrapping also wrap around some of the fingers as well. The final hand is like the two predecessors except the bandages/Sports Tape doesn’t go around the fingers and the feathers appear more controlled and styled as well as feather like. The first leg designed to show not only what his name means (Weaver Bird) but also one of his talents i.e. Pilot, this is shown by the feathers and the eye on the boots. The second feet design the one below the first are again designed to show of the bird like features of the character, this is shown with the talons on the front of the shoes, they where originally placed there to allow the character to land easier when he attempted to land. The third leg design underneath the bottom of the second design, The shoe is designed to look more like a boot and on the rim of the opening of the boot there are feathers wither to indicate that he is a pilot and a he is a bird. The fourth leg design is in the top right and is designed to give various hints of his species and his piloting skills i.e. the feathers on the rim of the shoes near the opening and the bird eyes on the front of the shoes. This is one of my favorite designs mainly due to the fact that it captures the nature of the character perfectly. The final design is designed to be like a boot and have a metal buckle the reason for this is because it is supposed to take a wide range of punishment from rough landing performed by Ploceidae, when he attempt to land when he has finished flying naturally.

The Image you will see below is a first attempt at trying to learn how create Mobian body styles to help me understand How i can draw Ploceidae The Weaver and make him more realistic. The reason why I di this was to make the draw look more authentic and the image below is not the final design or even a design idea it was just a basis to see if I could capture the essence of a Mobian quite well and from what I can see he looks quite realistic apparent from a few factors such as the beak but I am looking into that as well as other factors that will make him look more bird like. 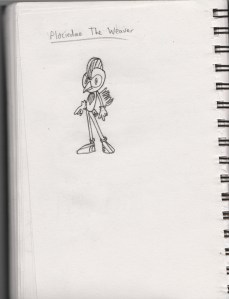